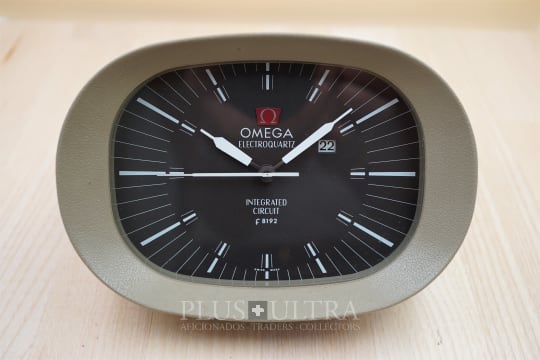 Next to the fact this model was made just in very few examples (some say around 10, with one in Omega Museum and another at Swiss Time Services in the UK (see Wikipedia: Omega ElectroQuartz), but I personally think they made some more) its importance is obvious -- and there are probably not many watches / clocks that have such a deep industrial-historical mark -- see our blog for details. And we are especially happy we could offer another one in the same year.

Furthermore, there are some very remarkable aspects with this clock:

- inside it has a approx 50mm*10mm oblong aluminium-box holding the 8'192Hz swinging quartz;

- it had a stepper-motor, so the hands move one step every second;

The movement works perfect and precise in every aspect: The date and date-quickset work fine as does the seconds-hacking feature. Important: The plastic case (thermoplastic Cycolac resin) has a small spot, probably from heat on top, a superficial crack on the bottom and the pin-holder is missing. But this is a very common problem with these and not obviously recognizable -- rather a design- & construction-mistake obviously, than bad treatment in the last five decades.